Mindfulness Like Celadon Must Be Experienced to Be Understood

When creating a listing on Etsy, one of the things you do is add tags that describe your piece, such as  color, shape, usage, etc. so people can find it more easily in a search.  It is often difficult to decide what colors to use.  Do you just use the word "green" when it is really a lime green?  If someone is searching for a green necklace are they that specific?  Needless to say, the answers are quite illusive, and you just use words that seem to be the most direct.

Describing the color of the little green-blue bird on this necklace yesterday I had to stop and really think what words to use.  One issue is that describing color can be very personal.  What looks like blue to one person might look like purple to another.  It is actually quite difficult to find true colors.

Then the color "celadon" popped into my head. Yes, the little glass bird was celadon in color.  I typed it in with the other tags and posted the listing.  But I could not help wonder if what I thought the color celadon looked like was really the same color in the little bird charm, so I googled "celadon" in Google images.  Above is a picture of the necklace with what showed up in Google images, which confirmed I had found the right descriptive color.

It was interesting to read a bit more about celadon.  It is actually used most to describe a certain Asian glaze in pottery.  (I know the little bird charm is actually glass, but it is the same color as many of the celadon glazed.)

I was quite struck by this description I found for celadon green in Wikipedia:

These pots have blue-green glazes and are made in elegant shapes and were produced in kilns from all over China. Korean celadon pottery has been described by ancient Chinese artisans as having a quiet elegance whose color is "beyond description", in that it must be experienced to be understood, and its simplicity of form and style has been compared to the spirit of Zen Buddhism.[49]


I really like how they describe celadon as:
"having a quiet elegance whose color is beyond description"... "that must be experienced to be understood..."

That really is another description for mindfulness, and it is really not as illusive as it seems at first.

Giving Ourselves a Soft Place to Land


Yesterday, I tried something new and different adding a some color.  As I created this necklace, these are a few thoughts that streamed through my mind:
I wrapped the metal rings with embroidery floss to make this necklace.  It is much more colorful.  I notice that when I give myself to the present moment, I notice things I would not notice otherwise.  Sometimes, what I notice more is color--the different greens in a leaf, the pink of a blooming gerber daisy, or the turquoise of an ocean bay.  Yes, all these are a soft place to land.

May you all find your own soft place to land.
Posted by prayer bedes at 7:18 AM No comments: 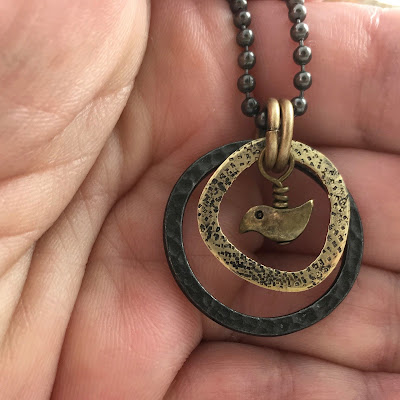 I had some fun stamping brass yesterday.  The brass circle is not a "perfect" circle, yet isn't that how our lives really are?  Today, I am embracing my wonky circle.  So many times beauty really is in the imperfect nature of things.

May you hold yourself gently today--wonkiness and all.
Posted by prayer bedes at 10:53 AM No comments:

When I received these rings with holes in them in the mail the other day, I started playing around with different designs. After I looked at this leaf combination, I was reminded of a visualization practice my therapist taught me years ago. The idea is that visualize a stream with leaves floating by and place your thought or feeling on a leaf and watch is float away.

There is quite a bit of information on this practice on the web.  This one from YouTube is one of my favorites.

Posted by prayer bedes at 10:27 AM No comments:


This song may or may not apply to the practice of Mindfulness, but it went through my mind when I was making this new necklace.  :)

Posted by prayer bedes at 8:27 PM No comments:

Slowly but surely,
I have been listing the Mindfulness Reminder Necklaces in my Etsy shop!
Come take a visit!

Posted by prayer bedes at 1:49 PM No comments:

Other Mindfulness Reminders on Etsy

The other day I ran across one of these leather bracelets with a ring on Etsy, and I thought how many things could be used as mindfulness reminders if that is our intent. 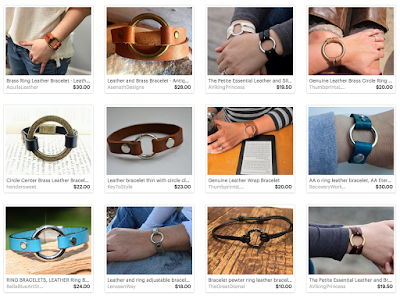 Etsy no longer has a Treasury, which allowed you to make picture boards of your favorites with direct links to the items.  But this is a screen shot of leather circle bracelets I put in my favorites.  I think I want one of these!


Here are the links to the Etsy shops for the bracelets above:
Aquila Leather
Asenath Designs
A Viking Princess
Thumbprints Leather
hender sweet
Key to Style
Recovery Works Co
Bella Blue Art Studio
Lenssen Way
The Great Dismal
Posted by prayer bedes at 10:59 AM No comments:

The Irish Celts and the Circle

I think I have always been drawn to the significance and symbolism of the circle shape.  There is more than one reason I have chosen that shape as a focal point for CenterRings mindfulness reminder necklaces.  To me, the circle is a symbol of acceptance and trust.

From the perspective of Celtic spirituality, I feel this quote sums up the significance of the circle well:

I ran across this article from Psychology Today that reminded me of a very profound statement my therapist said to me when I was first trying to figure out to cope with my panic attacks.  I was describing some of the thoughts that spun around in my head at high speed when I was having a panic attack.  She said to me, "What you think might not necessarily be the truth."  Well, that got my attention!  When I looked at my thoughts like that, it made me sound like some kind of ego maniac with all the answers.  Whoa!


Was that what I was doing with my thoughts?  Ya, I kinda was!  Granted, in the midst of a panic attack shutting down my thoughts seemed impossible to do.  In fact, I found that trying to get rid of anything just so I would not panic actually fueled the panic even more.  Still, realizing that I was believing what I was thinking was a significant turning point in my journey.

Posted by prayer bedes at 3:46 PM No comments:

I started working on this idea of CenterRings over two years ago, and I finally made my first listing and opened my Etsy shop.  That may seem like no big deal to many of you, but I was reminded how much work goes into getting an item ready to sell.  If only I could just make these necklaces and they would magically be photographed, described in writing, priced, weighed, measured...  I went through all this before when I opened my Etsy shop prayer bedes (which I hope to get active again soon.  And I am telling myself that "soon" does not mean 2 years, like it did for the first post on this website!)

The pricing and shipping parts of selling my work are my least favorite.  In order to just get this off the ground, I decided to simply charge $18 and include complementary shipping in the US.

So, here it is--my first listing in my new Etsy CenterRings shop.  There will be more to come, today!

Posted by prayer bedes at 8:05 AM No comments:

Mindfulness and the Woodpecker

I saw this video the other day on Facebook, but it was not until today that I really thought more about it.  It is quite an amazing thing to see--a woodpecker hanging on to the side of a car window while the driver drives through Chicago on his way to work.

We have many woodpeckers in our yard.  They can be very annoying.  We even have holes in our house to prove they have been there.  On more than one occasion I have stuck my head out the window to attempt to frighten them away as they hammer their little beaks into the siding of our house.  They are very bold, and sometimes just keep hammering away even when I am only three or four feet away trying to shoo them away.

Yet, they are quite a beautiful bird too.  I see the large pileated woodpeckers hammering away at the trees in our woods. The funny thing is that it is not the large woodpeckers that seem so bold and peck on the side of our house, but the smaller ones.

When I first watched this video, it was mesmerizing to see how long that little woodpecker hung on to the car's open window.  I thought the wind would cause him to fly away.  Then the bird decided to fly into the car.  That is where I became a little concerned.  I pictured the bird flying around, feathers flying, and pooping everywhere because it was so scared.  But no.  The bird just hopped around on the driver's shoulders and chest, seemingly without a care in the world.  That little woodpecker was not annoying but quite amazing.  It is also very sweet the way the driver responded to the situation.

Here is that video of the woodpecker in the car window.  I found it on YouTube.  I bet this guy filming the event never thought it would be something that helped someone else deal with panic attacks.  I must insert a smiley face here.  :)

Link to my Etsy Shop